Although there is an on going debate which is better Canon or Nikon, we need to firstly remember everyone has their preference and just having a good camera doesn’t make you a good photographer.

My first published photo (well outside my own company) was taken with a small casio camera.

If I go back to my very first DSLR camera it was actually a Minolta Dimage 7i, that was back around 2001 and it actually almost put me off photography for life. It took ages to shoot anything in full resolution, which meant if you took a picture of anything that was moving the first shot had to be the right one or you missed it.

Here is a sample shot taken of a train track, actually not bad image quality for only a 5 meg camera from almost 10 years ago. 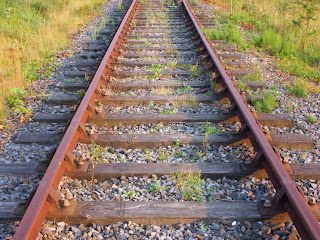 shot taken with Minolta Dimage 7i
Although it took a while this camera actually produced great results and I used the above shot for an advertising bill board and it looked ace. So remember kids just because your new £200 camera has an 18 meg sensor, all sensors are not the same (more on this in a another post)
Now back to the point of this post, which is better Canon or Nikon in short the answer is neither, its all down to your personal preference, mine being Canon. Although as most people out there will know both Canon and Nikon are heavily consumer brands and both have a limited series of truely professional cameras unlike companies such as hassleblad so in truth in most professional fashion circles most people use neither Canon nor Nikon but Hassleblad.
So unless you are using a Canon 1D series or Nikon D3 series then the differences are really only down to how you use the camera, but like I said at the beginning its not the camera that takes good pictures its the photographer.

Note – Nikon does class the D300s, D700, D3 and D3X as professional level cameras although in reality only the D3 series is on par with the Canon 1D series

Control Lay out
As most people will know there is a real difference between Canon and Nikon in how the controls are laid out, although each make has the same features they are accessed differently on a Canon to a Nikon. (more on Canon controls in a future post)

Nikons in general have a better price range, I am not saying they are cheaper but you can get a Nikon professional level (by Nikon standards) camera for the same price as a Canon Prosumer one.
Image Quality

As for image quality I personally prefer Canon, although not a huge fan of the massive price difference between normal and L series (canon professional) lenses. But after my initial testing I think I prefer the Canon image quality.

Although I am a Canon users I have to be honest and say that there are a better range of accessories for Nikons, especially where pricing comes into it, the range of lenses and flashes for the same prices bracket as Canon is far superior. But in this day you get what you pay for and although there is better choice doesn’t mean they are better quality.
And thats it apart from anything else there is really no different between Canon and Nikon, its simply down to your personal preference and what you can afford or want to buy. I have seem great photos taken with both, but I am sticking with Canon as my personal weapon of choice.

OK as time has progressed and my photography moved on to more advanced areas, such as off camera lighting I have found one major pain in the bum with my Canon and that is connected to how the hot shoe connectors works, although I will talk about off camera lighting in a future post, I feel I should mention the fact here.

Canons hot shoe functions in such a way that the 2nd curtain trigger is not controlled by the central connector, this means that when using certain triggers it is impossible to shoot 2nd curtain due to the limited that the signal is sent via a series of pins, not just the centre pin. Whilst its fine to fire the trigger for most things, for 2nd curtain it doesn’t work. Unfortunately, or fortunately for Nikon owners, Nikons don’t work this way and are happy to use the same pins for 1st and 2nd curtain.
So this thus far is my only issue with Canon.

This site uses Akismet to reduce spam. Learn how your comment data is processed.