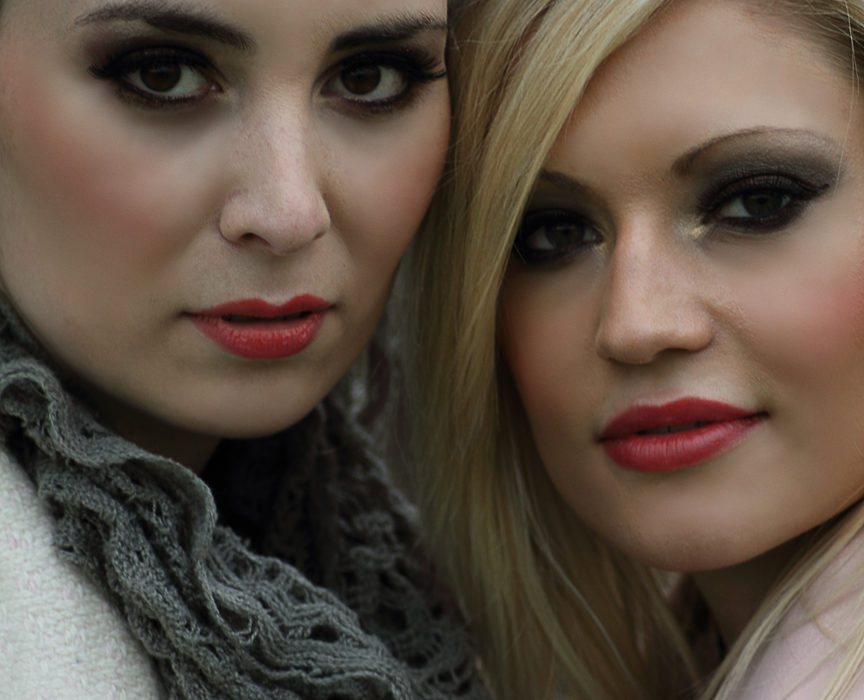 This shoot was one that I had been looking forward to for ages as there was lots of work  put into the planning, and there was lots of time deciding on the type of shoot, the fashions for the shoot, the location and finally the make up. The whole thing was made a lot easier as one of the models Jenna is a make up artist, so she had lots of ideas on the look for this shoot, keeping in mind my simple brief of a “light and airy shot”.

As Becky, Jenna and I had worked together on a previous shoot (althought not one of mine), there was already a great rapport which made the whole thing go so smoothly.

Hair and Make Up

The look we decided on for this shoot was a light and airy natural feel, and after loads of emails with Jenna about the makeup we finally decided on the look for the shoot, well to be honest the actual look was more Jenna than me, all I knew was I wanted an airy feel (how she managed to come up with the fashions and make up still amazes me).

So on the day of the shoot we arrived in Wetherby and Jenna set about doing the make up, this took the normal amount of time for a fashion shoot, about an hour. The end results were amazing, the look and feel was exactly what I wanted. Not too much make up and a natural daytime look.

So once the makeup was all done and outfits chosen, we set off for the location. Spofforth Castle in Wetherby.

On arriving at the location, it was necessary to be a bit hush hush about the shoot, as the castle is an English Heritage site and they dont take too kindly to photography in their properties.

But the location was just amazing, there was lots of different areas to play around with and as each of these areas had different lighting it made it even better as this meant I could play around with not only using some gels, but also use the reflector for some shots.

The only down side of this location was that as it is a public place there were people around, and in particular one family who kept on walking past the area we were shooting, in fact there kids just kept being annoying and just running everywhere. It wasn’t the fact that they were in the area, more the fact that we had our bags in the area. So as you can guess this was a pain.

However this location did have some very cool surprises up its sleeve, it had a little dark room were Becky and Jenna could get changed between sets, kinda useful and not often found on location shoots.

Ok so we got underway with shooting, and the initial shots were taken, and as it turns out theses shots were more of a get a feel for the lighting and location, than great shots. Lets just say they turned out not so great, I would even go so far as to say rubbish.

However, once we got further into the shoot the lighting was working really well, and the poses were really working, very natural and soft. Just the look I was after. So we took some shots in the main part of the castle and they just popped.

Part of the castle is old stairwells and windows, all of which really worked for amazing backdrops, either because of the excellent ambient light, or because the flash just bounced around perfectly. Also the fact that Jenna was happy to try anything to get the shot, even holding the lightstand meant the shots that we got are really excellent.

We then moved onto the stairway in the castle, which threw up all sorts of lighting challenges, as there were really bright areas, really dark areas and hugely light absorbant surfaces everywhere. But this made the shots better, I decided to use a mix of backlit gelled shots as well as front lit reflected light shots. Must be honest and say that these shots are some of the best of the shoot. We even got some very close beauty shots using this great light.

It made it even better as Becky has been so used to holding the reflector in the past, meant I got some great beauty shots of Jenna, which show both the beauty and the make up in the shots.

Then finally we moved to the outside of the castle, and due to the fact that its an old castle we were able to get some great shots of the ruins in the background, and even sitting on them. These made amazing advertising type shots, and were good enough to go on my website.

All in all I am so happy with the outcome of this shoot, extra please that the effort put in by Jenna in the initial planning on the outfits and makeup as it made the shoot just work, which also meant I got a sets of images that are totally different looks all from one shoot.

But as always you can be the best judge of the shots, and please comment as to whether you like the shots or not.

To see some of these shots in full size please visit my gallery on my website http://seanjconnollyphotography.co.uk/photography_gallery.htm