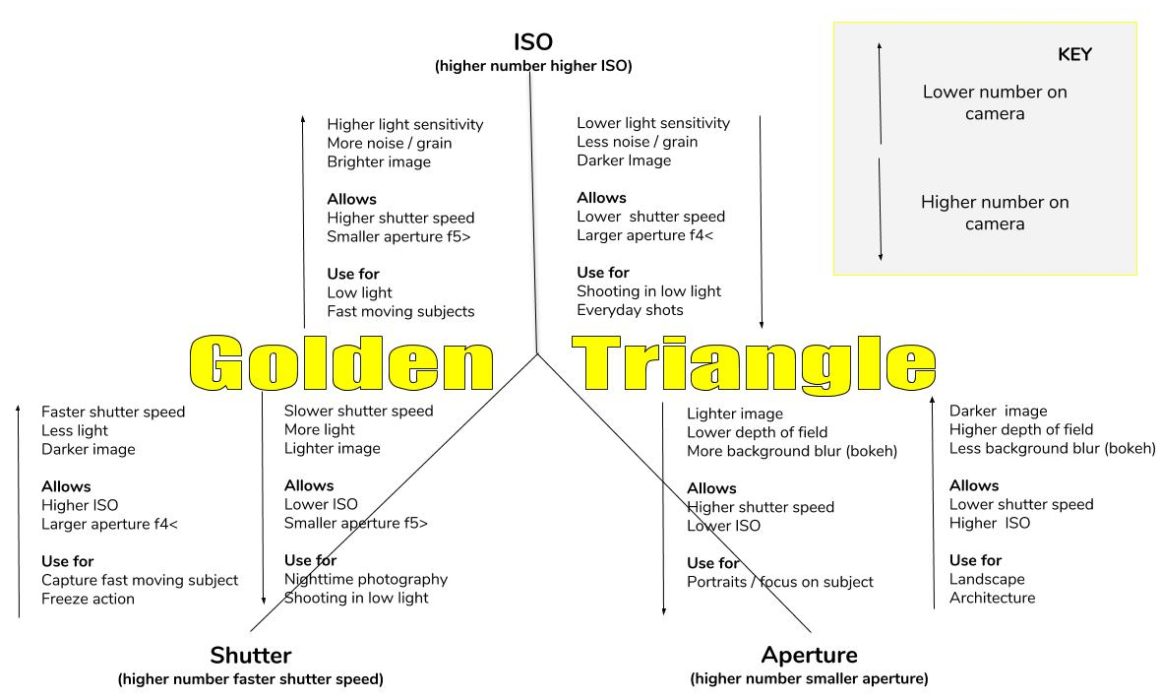 One of the most confusing areas in photography has to be what is known as The Golden Triangle or The Three Pillars of Photography, this being ISO, Aperture and Shutter Speed. I get tons of questions about trying to get out of Auto and move into Manual mode.

“You change one, you change them all”

This post is a guide to exactly what ISO, Aperture and Shutter Speed are and what they do and how they effect your photos, plus the relationship between them. Plus as a little bonus I have drawn up a chart for you to download and keep to help you in the field or where ever you need a quick reminder.

Lower ISO is typically used in ever day shots when a sharp crisp image is required.

ISO standard setting in most modern camera is 100

A lens with a wider aperture such as f2.8 is known as a Fast Lens.

Shutter speed is the speed at which the camera shutter operates and the camera captures the image, and subsequently the amount of time the sensor is exposed to light. 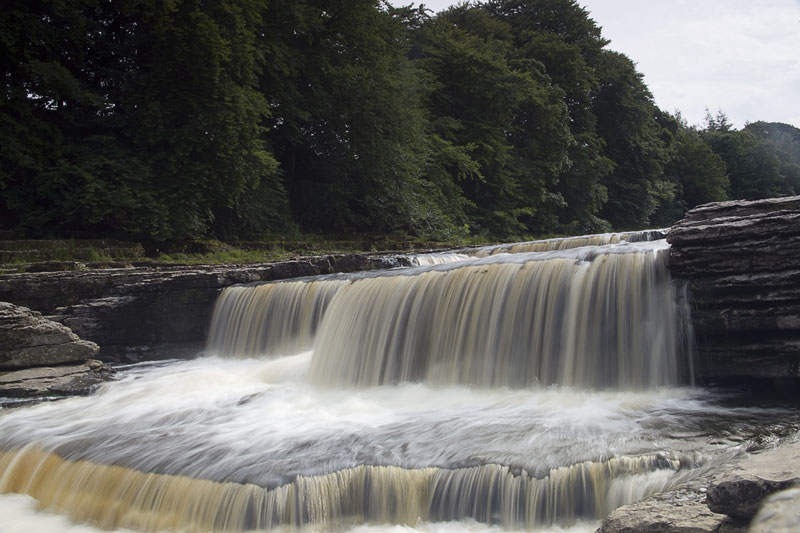 In order to make it a bit easier to understand the relationship  between ISO, Aperture and Shutter Speed I have drawn up a simply diagram below. If you would like to download a copy to use in the field or for you own use,please use the buttons below. 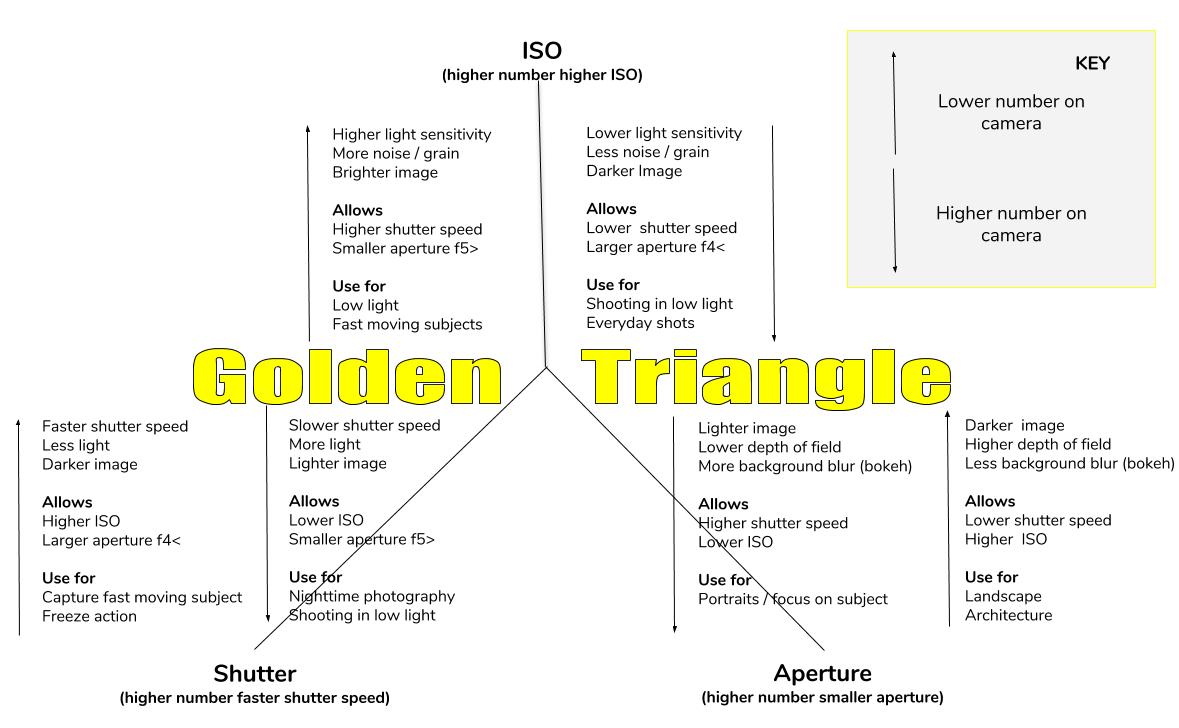 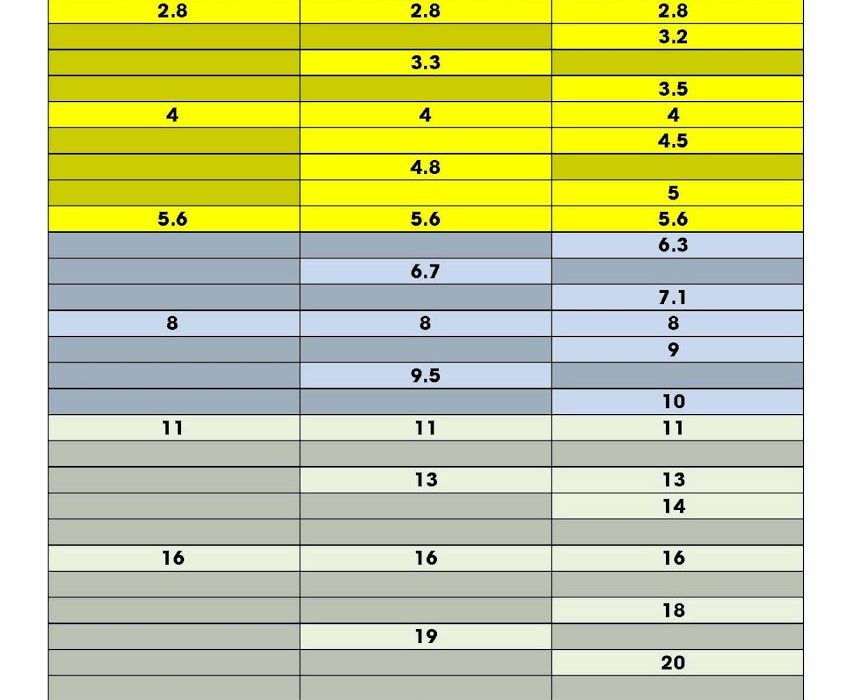 So rather than try to write a description about the numbers I decide to draw up a chart. 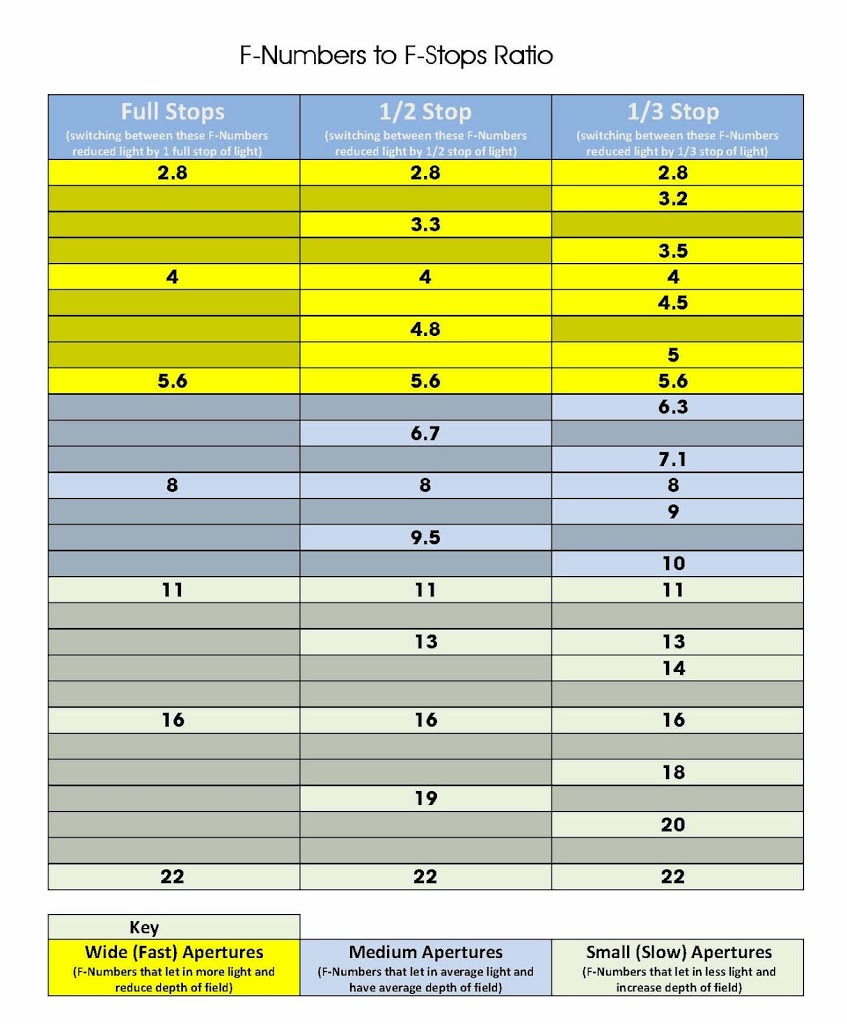 Please feel free to download this chart for your own use, and if you do wish to share it, please credit me. Thanks

How to use the Chart

The chart is pretty simple to understand, along the top are 3 columns, starting with Full Stop, 1/2 Stop then 1/3 Stop, reading down each column you see the camera F Numbers. The gap between the F Numbers is the amount of light you are reducing or increasing into the camera.
Lets say you want to reduce the light by 1 Full Stop of light, simply look at the first column titled Full Stops and switching the F-Number on your camera between these settings will decrease or increase the amount of light accordingly. Using the second column and switching between these F-Numbers will reduce light by 1/2 Stop and finally switching between the F-Numbers in the 3rd column will reduce light by 1/3 Stop.
I hope this all makes sense, any questions just let me know in the comments.
PDF DOWNLOAD
JPG DOWNLOAD

What are F Number / F Ratio and F Stop?

Although many people use the these to mean the same thing,  they are in fact different things all together. To put it simply they are.

F Number / F Ratio is simply the ratio of light entering the lens aperture to the focal length of the lens.

“The diameter of  the lens opening and the amount of light entering, expressed as a fraction of the focal length of the lens” Ansel Adams

So in order to gauge the F Number and the size of the aperture and available light, just divide the open aperture with the focal length of the lens.

As you can see from the diagram above, the larger the F Number the less light allowed to enter the lens and the more depth of field you get (more of the frame will be in focus and less Bokeh).

Ok so I have given a little insight into how to mount your lens and what its buttons do, I am also going to give you an quick overview of the most common terms you will hear in connection to photography. Dont worry its not going to be too indepth or technical and definately not going to go on for ever, its just a simple guide to help you with you photography success.

And before you start go saying “what about this and what about that”, this page is only meant to give the most common terms you will encounter when starting and working in advertising, fashion, editorial or commercial photography. It is not meant to be a full list of every lens type or every photography term on the planet.

The first thing to remember is the DSLR standard for Digital Single Lens Reflex, as is there is a single motion in the lens to take the shot, and its digital. This differs from how cameras in your mobile phone work, such as your iPhone, although it is still possible to take some great photos or movies on your mobile

This is a common term used to simply mean the lens, this comes from the simply fact that lenses contain glass and the better lens you use the better glass it has inside.

This is one of the most common terms you will hear about lenses and at first hearing you assume it must be to do with the speed a lens can take a photo. Wrong.

Lens speed is the term used to indicate how much light gets into the lens via the aperture, the larger the aperture the fast the lens. For example a 2.8 lens is faster than a 4.0 lens as it has a larger aperture opening to let more light in.

Generally lenses classed as fast are aperture values 2.8 and lower.

Thought mentioning this made sense after the lens speed thing above. When discussing the aperture we are talking about how open the lens gets and how much light is allowed to get into the camera.

This is a little confusing as we talk about higher aperture, which means a larger lens opening but in actual fact the aperture value will be less, as 2.8 is a faster more open aperture than 4.0. Simply put the lower the number the more light enters the camera and the faster the lense.

Aperture values are expressed as f numbers such as f2.8, this is because the aperture value is actually a fraction of the focal length of the lens. (not going to bore you with maths)

This is normally expressed in mm such as 70-200mm lens for example and is simply how far the lens will zoom in and out.

Lenses that do not have a fixed focal length, this lens can be zoomed in and out.

Lenses that have a fixed focal length, typically used in portrait photography. This lens does not move and cannot be zoomed in or out.

A lens which can capture a wider field of view, simply it can show you more of the scene when at its widest setting typically 28mm or lower.

This is an expression of the amount of given light falling onto a subject, typically for each number the light is reduced by 1.

This is the terms used when a DSLR camera has a sensor size less than that of a 35mm film frame, typically expressed in terms of numbers such as 1.6 which is the crop factor compared to a full frame.

This is the terms used for cameras than can take photos that can be printed at 1m x 1m or large, this size is commonly used when selling your shots for use in large billboard or posters.

Reflector
Something used to reflect light onto or away from your subject.

Attachments to the lens to change available light, add effects and many other things. They normally come in either screw on or holder types, filters can be used to create some great shots and add something to your shots that you would normally do in Photoshop. For an example of what you can do with and without filters I recommend this EBook series

This is the art of taking a photo that has a multitude of uses, and is normally sold to a Stock Agency to be resold. Images that are Stock as things like a picture of a person reading, something ona  desk or anything else that is generic in nature. For a bit for on this and how to make a living out of Stock Photo check out this great EBook by Nick Stubbs